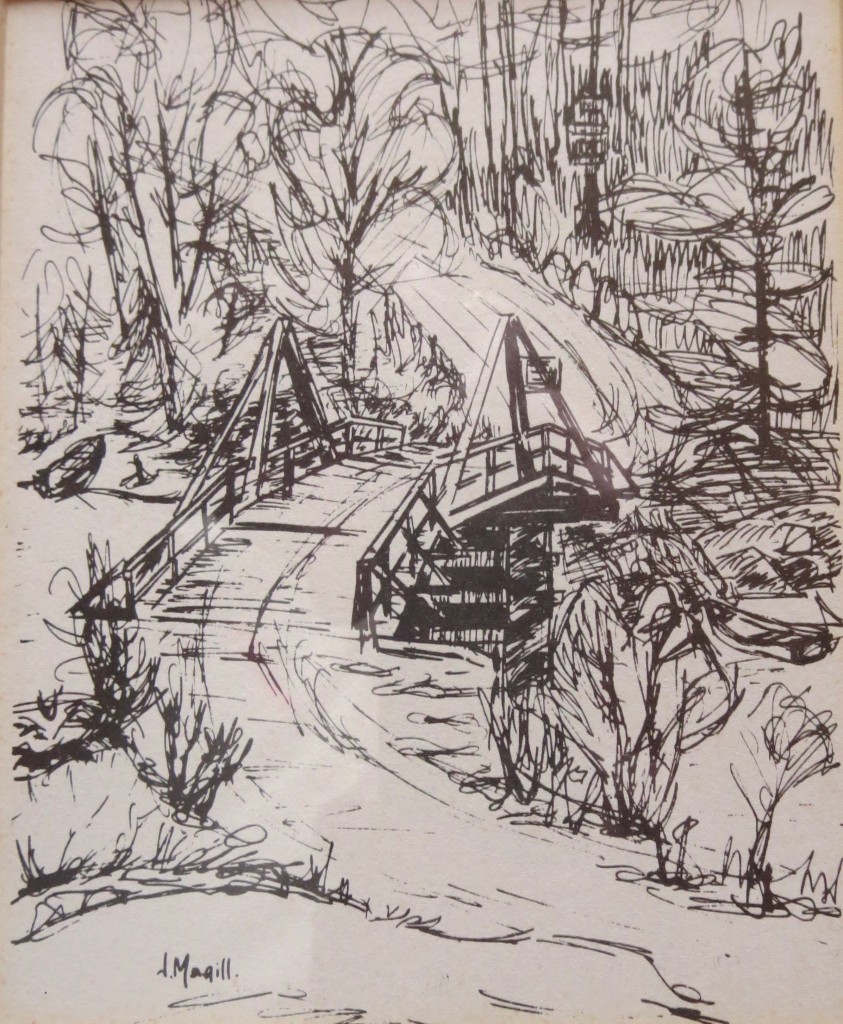 Mothers and children gathered early on a summer’s Friday night at the Little Hawk dock to socialize with their neighbours and to make plans for the weekend while waiting for their husbands/fathers to arrive. But then the ordeal began: off-load the car, fill a small boat with the weekly provisions etc., and depart for the cottage, off-load the goods and bring to cottage; viola, another week in paradise.

Those boating on Little Hawk didn’t have to worry about the seasonal water levels. However, those boating to Big Hawk were fine going through the narrows during the high water, but faced challenges mid-summer onwards due to the significant drop in water levels. Many Big Hawkers had a second small boat at the narrows during this period because of very low or no water in the channel. And again: off-load one boat, re-load the next and finally on your way to your Big Hawk cottage. Was this really the best use of time and energy to enjoy your time away from work, especially on a wet, dark and windy night?

Beginning in the early 1950’s there was talk, primarily amongst Big Hawkers on the south shore, of having a bridge and road built from the old dam all the way through to Oakview Lodge. The early days of the Lake Association had a committee involved in trying to accomplish this with the Township, but to no avail. Then in August 1959, fifty-nine Big Hawk Lake property owners signed a petition and contributed money to achieve this objective. The Big Hawk Lake Road Committee was formed and a group of determined individuals: Gord Stiver, Al Malton, Vern Agnew and Mervyn Holt, began the process of getting the funding, approvals and contractors.

At first there was hope that the Ontario Department of Highways would contribute 70% to the cost of the project if the Township of Stanhope would assume the road, given the Township’s history of doing so with other area lakes. Also, given that hydro lines were recently brought in and serviced by boat, there would be a financial benefit to the Hydro Corporation to have easier access to the power lines; hence a contribution to the project would make sense. In both cases, there was no support.

The Big Hawk Lake Road Committee pressed on regardless of the set backs and accepted the fact that it would have to be a privately funded road. To achieve this objective, numerous letters to various levels of Government were sent back and forth. Petitions to The Department of Land and Forests ultimately led to permission to build the road provided there was an insurance policy for liability (cost $74.25/year for $200,000). Given that the new bridge would span a navigable waterway, permission was required from the Federal Department of Public Works, which was ultimately granted March 8, 1961.

The project was completed in the fall of 1961. Reg Hicks of Minden constructed the bridge for a cost of $3,250. The cost of the road, from the bridge to the narrows, constructed by Prentice Roads and Excavating, Minden was $7,272.56. The cottagers donated the initial capital costs. If a cottager wanted a spur from the private road onto their property, the cost was $.30 per running foot (those were the days!).

At the first annual meeting of the Big Hawk Lake Road Committee on July 1st, 1962 the annual dues were $15.00: $10 for maintenance and $5 for special projects. The meeting was held at what is known today as Scow’s Landing. This was a parking area for those who had water access properties.

I have tremendous admiration for those amongst us who rely on watercraft to enjoy their time on the Hawks. But I really appreciate the efforts of the pioneer group that worked diligently to get the bridge and road built, especially on a miserable, cold and wet night.