Driftwood: More than a piece of our past 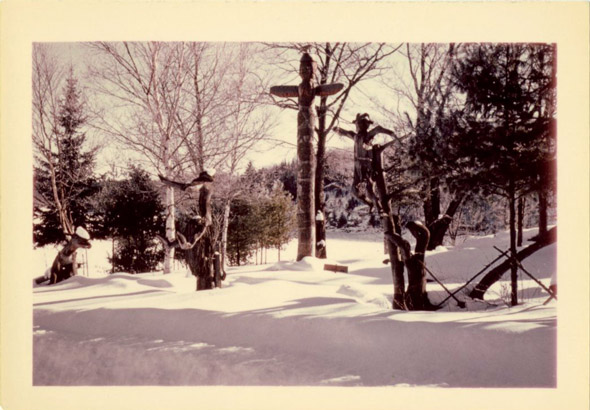 Some Little Hawk Lakers may be old enough to remember the creatures that were fashioned out of driftwood that used to stand in front of Warren Pinch’s “Fisherman’s Paradise” on Little Hawk Lake, at the end of the road and opposite what is now Oakview Lodge.  My own fascination with driftwood comes from my years of kayaking around and admiring the beautiful old stumps and imagining the trees that used to stand in the Algonquin Highlands before the logging industry cut most of them down. 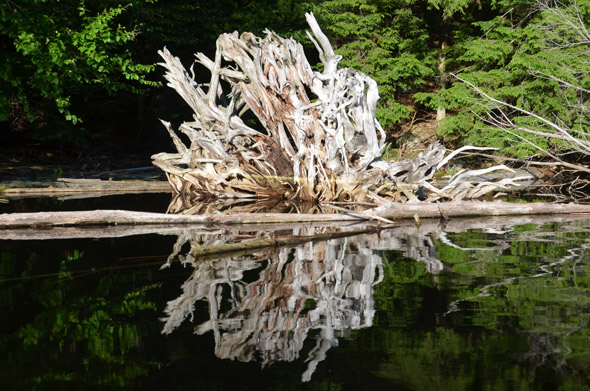 Other long-time cottagers, like Jan Bertram remember dodging floating stumps when the family arrived in the dark and had to get to the cottage without hitting one of them.  Guy Scott remembers being the “bow-man” who watched for stumps while travelling through the narrows between Big Hawk and Little Hawk Lakes.  Don Henderson remembers that there was a whole pile of driftwood in front of his place close to Scott’s Point, that was burned just prior to him taking possession of his property in 1964. Maybe you have had the misfortune of running into drifting wood? But have you ever considered collecting it to make art or maybe using it to build a cottage? 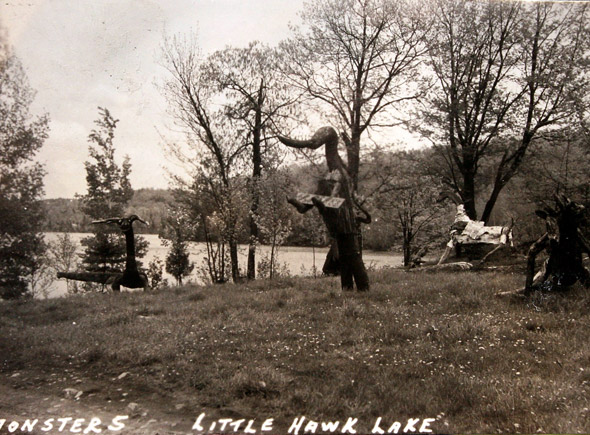 Warren (Pa) Pinch who came to Little Hawk Lake for the first time with his father Alpha Omega Pinch in 1912, was the first creator of the driftwood creatures or “Monsters” as they came to be known. 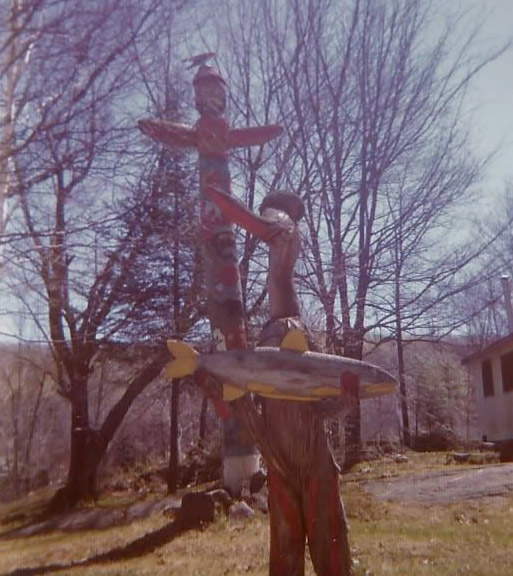 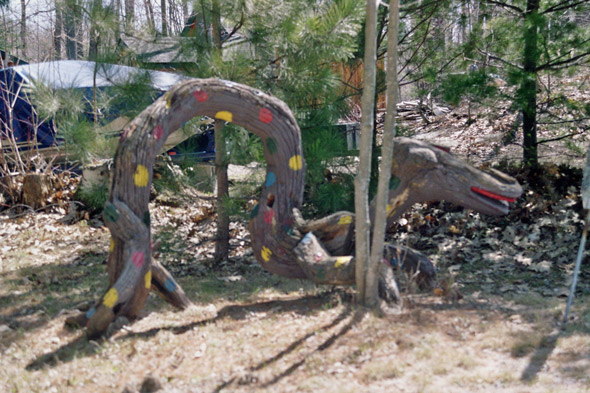 Among his numerous creations, Pa (Warren) Pinch carved a totem pole.  There were even squares near the bottom made to hold photos of each of his six children: Ted, Horrell, Gerry (better known as Chub), Elsie, Bill and Alan.  As related in a 1990’s story in the Minden Times, we also know that Pa Pinch had an agreement with the lumber company whose camp was located on what was called McLaughlin’s Bay, that he could have any of the logs that made their way out of the log boom. In this way Pa Pinch was able to collect enough stray logs to build his first cabin in 1931.

In those days, being poor didn’t keep you from cottaging. The Pinches may have had to scrimp and save to buy gas for the car and the boat.  But land prices were still reasonable, compared with the wage of the day, and there was scope for ingenuity and hard work to make up the difference between what you needed and what you had in your pocket.

For $30, Pa purchased some Crown land near the public campground at the end of the logging road (now the paved route into Little Hawk) and, with his brother William and his son Ted, built the cottage known as Fisherman’s Paradise.  It was the original time-sharing plan: each man and his family would have it for one of the three summer months-June, July, or August.  The only problem was, whoever got to use it in June didn’t want to leave at the end of the month to make room for the next one.

At the same time Pa bought the lot for the cottage, he was offered all the land at that end of the lake for $100.  His response is now part of family legend: “What would I do with all that land?” he asked.  But as time went on, he figured out what he could have done with it and set about to make up for his mistake.  One person could not buy more than one parcel of Crown land.  So Pa used everybody’s name in the family – including the sisters-in-law- in order to purchase more property.
(Source “Hooked on Little Hawk: The first generation by Susan Wilson, Minden Time supplement “This Week”, July 14, 1990)

Pa Pinch also somehow found time between his fishing and building of cabins to create the driftwood “Monsters” that so many Little Hawkers enjoyed over the years.  Long-time cottagers like Ann Reynolds remembers that she couldn’t wait to get to the cottage when she was a kid and one of the first things she saw on arriving at Little Hawk was the Pinch “Monsters” dressed like people or painted with green and yellow polka dots to supposedly look like dinosaurs. 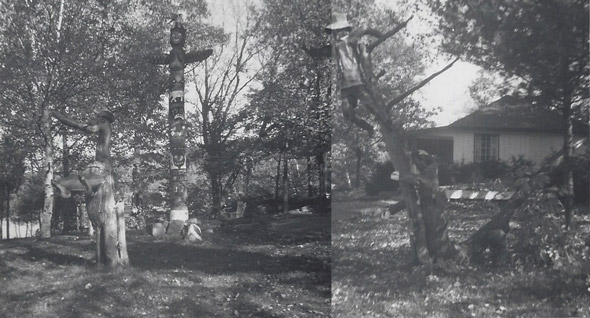 Photos courtesy of Rita Dadzis and her Brownie camera, opposite Oakview Lodge, 1963 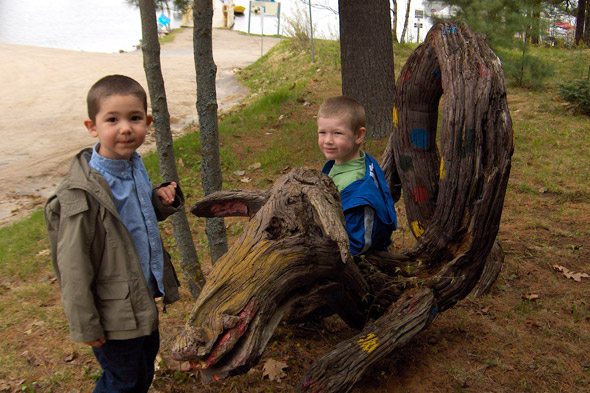 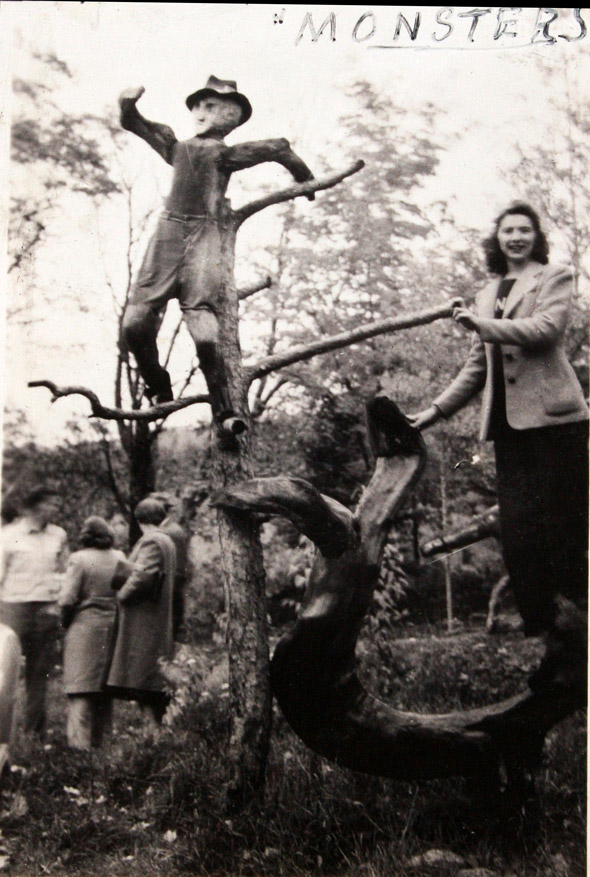 Even before the age of “selfies”, young and old from near and far would climb on the “Monsters” and have their photos taken as a souvenir of the good times that they had or were about to have at Little Hawk Lake.  The driftwood creations were definitely a landmark that everyone who made their way to the end of Little Hawk Road remembers. 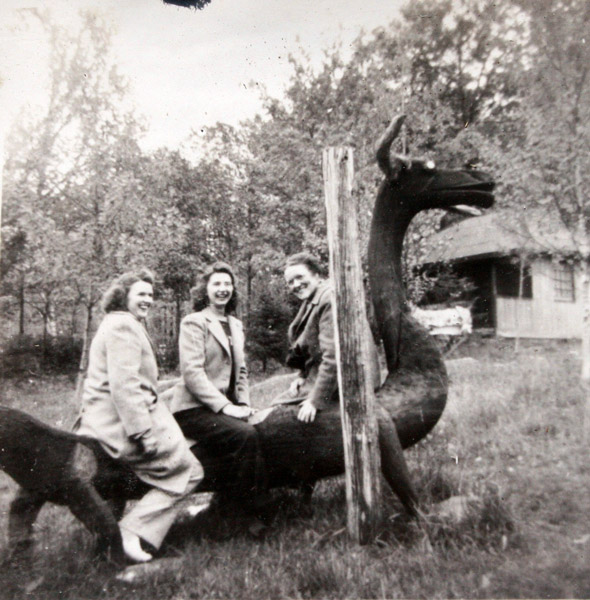 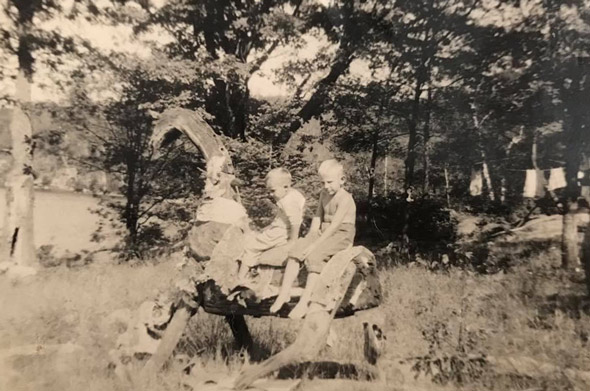 Pat (Patrick Warren) and Billy (William John) Pinch, sons of Willaim (Bill) John PInch Sr. and Dora Mae Pinch having fun on the driftwood creature made by their grandfather .  Photo courtesy of Mary Kay Pinch-Allemond circa 1952

As Guy Scott explains, ‘driftwood art used to be popular back in the day. Artists would scour the bays and beaches of Hawk Lake looking for “features” in the bleached wood. And Hawk Lake had lots of driftwood! Some of the logs and stumps dated from the logging era. At Scott’s Point we had 2 bays just filled with the stuff. It was a great searching for art past time’.

In present times and especially at low water times, kids like Tiana Weiler and her siblings enjoy exploring and taking photographs on their property on Little Hawk Lake. Sometimes these photos are even submitted to the annual HHLPOA photo contest for the calendar! 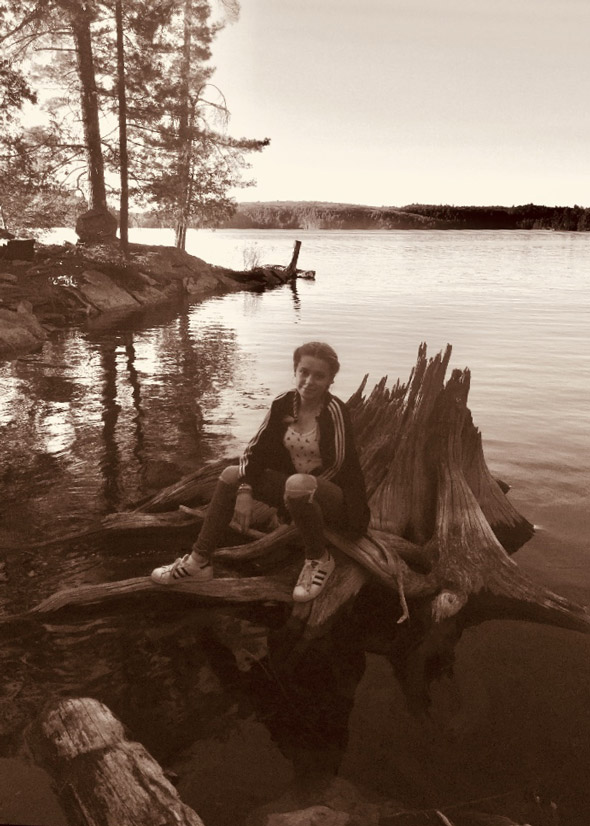 In addition to admiring the stumps as I kayak around the lake, I know that I enjoy watching the bass come every year and guard the stump close to our dock, where they have their young each spring.  Even old stumps serve a purpose!  Sometimes the old driftwood becomes the nursery for a new tree. 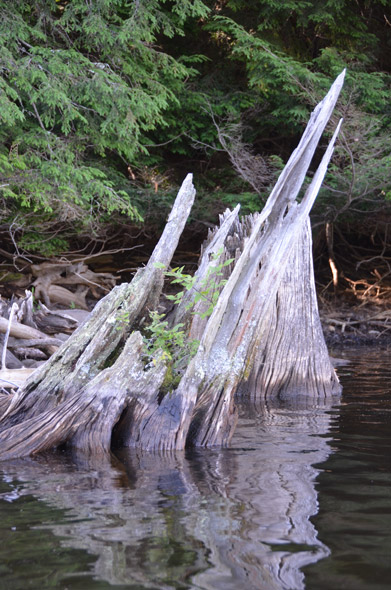 Ron Socha from Big Hawk Marina tells me that there is an artist who boats around the lakes looking for interesting pieces of driftwood even today.  He takes his interesting finds back to the big city where he makes artsy lamps and other furniture that he sells for good money. 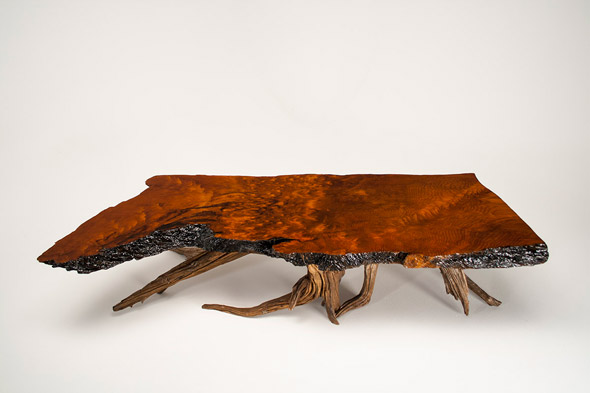 Times have changed. Perhaps there are no more “Monsters” greeting those who arrive at the end of Little Hawk Road but there are still mysterious pieces of driftwood that float around especially at high water times and  late at night.  I know I still think about the old trees that drifted downstream from as far away as Nunikani Lake, when the dam was put in there and trees were replaced by water.  If only that driftwood could tell us stories? Perhaps like me you also wonder about where are all those Pinch family descendents have gone? They can’t have disappeared like the family statuary. Or maybe you wonder who took down the driftwood  “Monsters” that were such a favourite attraction especially for kids? Or perhaps you see a driftwood connection with the Totem Pole at the Narrows between Big and Little Hawk?  Stay tuned for more  history to come!