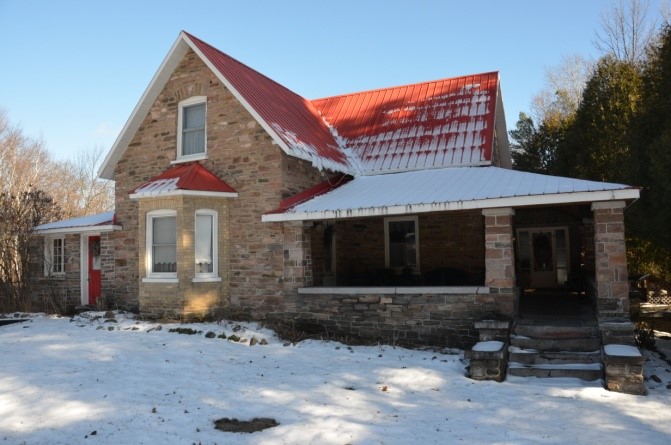 Garth Mole is so much a “local” of the Hawk and Hall’s Lake area that he goes back three generations. The family were some of the first property owners in the area. His great grandfather purchased, sight-unseen, 1500 acres of land for $1500.00. This property included a mile of shoreline on Hall’s Lake. His great-grandmother Sarah Welch was born in the area in 1870. This is where she raised her five children; Fred, Art, Amy, Ethel and Minnie in the late 1800’s. Times were certainly much tougher then. Sarah died in the area in 1947.

Garth’s family recognizes that his great grandmother was full of vim and vigour, just like his grandmother Amy (1889-1965) who followed. It’s clear one needed to be strong and tenacious to help the family survive in order to stay in the area. In fact Garth’s Uncle Art ran the Esso station in Hall’s Lake until about 1958. Some of you may remember it was located next to Club 35 on Highway 35.

Garth’s grandmother Amy Welch Gartshore Cooper and her husband were the original owners of Hillcrest Resort in Hall’s Lake, which included the stone lodge on the east side of Highway 35 as well as the building across the road that is now “Sage”.

Hillcrest Resort was built in the early 1930’s at the time when Highway 35 was being constructed. All the highway workers stayed at Hillcrest while they worked on the new Highway 35.

It was also a time when tourists were beginning to come to the area. Just like today they would come for a 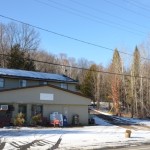 week and discovered that they liked it so much, they would inquire about property to purchase in the area. Garth’s dad knew a lot of people and he would give them ideas about places for sale. No doubt the same was happening at Little Hawk Lodge and Oakview Lodge. Cottagers started as tourists. For example: one of the earliest tourists who became a cottager, thanks to Garth’s family, was Ross Vincent. For many years prior to owning a house on Big Hawk Marina Road, Ross had a cottage on Big Hawk Lake.

Who could blame any of us for wanting a piece of this wonderful Haliburton Highlands to call our own?

These two buildings, along with a couple of cabins made up Hillcrest Resort. The stonework was done by a man named Billings, who is also responsible for the fine stone work of St. Peter’s Church on Maple Lake. Here’s more information about John Henry Billings.

The Welch’s, Gartshore’s and Mole’s are all buried at St. Stephen’s Church cemetery on Buckslide Road. 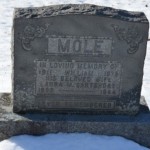 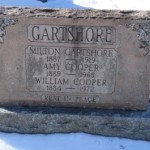 The connection to our lakes continue because it was Garth’s Uncle Bill who built the first Big Hawk Landing Marina in the early 1950’s. Garth remembers going there with a team of horses and sleigh in the winter to shovel off the roof. He also remembers the original store which was closer to the lake and erected on piers. It had two bedrooms, a kitchen and a counter with two or three stools. At that time there was no bridge at Big Hawk Lake, just a dam. Only two or three boats docked there in the summer. There were stories told about his grandmother Amy coming up to Big Hawk to clean the Government House. There was no road to the Government House (see previous story about this house on the HHLPOA website). Amy would have travelled the Mud Lake Trail or Cadge Road. Some of you will know the trail behind the Government House as the present snowmobile trail. It’s eerie to imagine Amy walking home in the dark and at one time being followed by a lynx. It stayed in the trees as she walked the forested trail. She would have needed nerves of steel. Certainly Amy was described as a bit of an outlaw. She would sooner do things illegal than legal. In fact Garth knows that she managed to keep some of the highway workers camps as her own cabins for Hillcrest Resort. They were meant to be moved to the next work camp for the highway workers as the road progressed north, but somehow they never made it.

Garth’s grandparents sold the Hillcrest Resort about 1950. His own parents were also in the business of keeping the tourists happy. They owned the Loralea Lodge from 1947 – 1972. 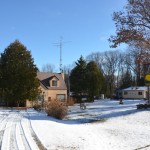 Garth has a clear recollection of tourists coming to Loralea when he was young and asking about where they might be able to purchase property. Garth knows a lot of cottager on Halls and Hawk Lakes and he knows many of them started out as tourists. He is still happily taking care of cottagers today as he works on big and small construction projects throughout the Hawk-Halls Lake area.

Written by Joan Hamilton as told by Garth Mole and with thanks to Wanda Mole.