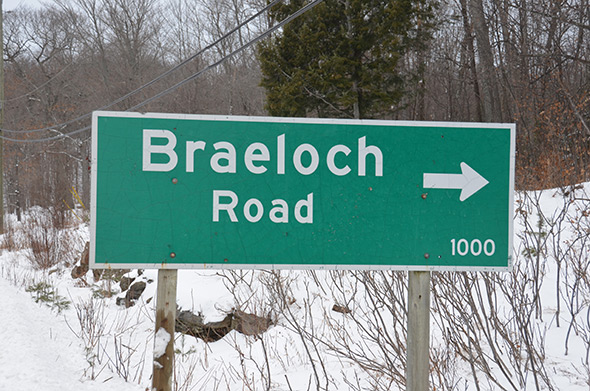 In the 1990’s, Stanhope County along with several other adjacent counties, decided that each property should have a unique designation that would make it possible for emergency vehicles to find a property easily when a ‘911’ call was made.  To that end, each street and laneway had to have a name that would not be confused with another street somewhere else in the area and each property had to have a defining number posted on it.  In the case of country properties, the number associated with each was determined by the number of decameters the property was from the beginning of the road.

Residents were asked to suggest names for their local roads for consideration by the ‘911’ committee.  The names of the streets whose names would have to be changed were posted in the local newspapers.  In our case, Highland Road, the road going east from Highway 35 to Little Hawk Lake Road had the same name as Highland Street in the town of Haliburton and was slated to be changed.  More importantly, the laneway that went from Highland Road to our cottage and eight other cottages had no name.

To help in the process, the Brereton’s held a “Name that Lane” meeting  to which the members of the families who owned cottages on the lane were invited.  Once gathered, everyone put forward names and all were duly considered.  From a total of about thirty names, two were selected to send to the committee.  One was Silver Sands Lane, the name that had appeared on the original boathouse on the Higgins (eventually Brereton) property.  The other name submitted was Loch Lane.  This name was in honour of Norm Wallace, the man who built most of the cottages on the lane back in the 1940’s and then rented out for many years as Highland Cottages.  In keeping with a Scottish theme, Norm had given a Scottish name to each of the cottages, e.g. Burnside, Lochview, Sunnybrae.  The Loch Lane name was an effort to continue on with the Scottish naming Norm had introduced.

Unfortunately, both our suggestions were eliminated because they were similar to names already in existence in the region.  We had to go back to the drawing board.

Ultimately, two names were proposed to the ‘911’ committee, both of which honoured Norm Wallace.  In keeping with the Scottish theme, the cottagers agreed to Braeloch Lane (‘brae’ meaning hillside and ‘loch’ meaning lake).  We also submitted Norm Wallace Lane which we hoped would be unique.

When we heard back from the committee, they informed us that they were impressed with the Braeloch name and asked our permission to use it as the new name for Highland Road.  The cottagers were a little disappointed, but all agreed to the request.  Eventually, the committee indicated that Norm Wallace Lane was uniquely identifiable and could be used to name our lane.  In the end, all the cottagers were happy with the outcome.  Although we had not intended to do so, we contributed two names to the map of Haliburton – Braeloch Road and Norm Wallace Lane.

Read more about how Braeloch Road (formerly Highland Road) was built in our previous Cottage Tale Highland Cottages: A labour of love on the south side of Halls Lake by Dorothy (Wallace) McCord