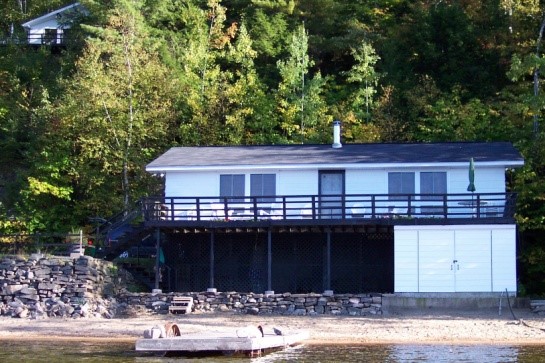 Built originally on the wrong lot in 1950. Almost destroyed by badly-planned and executed blasting by the Township in 1971. Burned to the ground on the same weekend rebuilding was finally completed in 1982.

Clearly this cottage has a history!

Buying a cottage before you own a home was not the usual way couples operated in the 50’s. Friends thought they were crazy but Helen and Ken Henderson knew something they didn’t when purchasing their piece of Halls Lake paradise in 1951. Regular escape from the City helps build strong family ties when the kids are young and a lasting place for family reunions when they go off on their own.

At first, there was no road access to Roxburgh and provisions had to be carried in from neighbouring lots on what is now called Norm Wallace Lane.

Then Highland Road, as Braeloch was then called, was extended to Roxburgh and a new staging area was born 30m back and 30m above the shoreline cottage site. It was still a ton of work hauling everything down steep dirt paths and slippery wooden staircases, but this was great family adventure on dark and stormy Friday nights.

Helen and Ken loved Roxburgh so much that in 1978 they built a retirement home at its highest point featuring a commanding view of the eastern portion of Halls Lake. The kids continue to use the shoreline cottage with its beautiful 100m of pure Haliburton sand beach and gradual slope perfect for generations of kids and grandkids to learn how to swim, ski, kayak and sail.

Ken died in 1989 and Helen in 2008 but their Roxburgh dream lives on with another generation taking up permanent residence at the top of the cliff in 2010.