‘The Cottage’ by Chad Ingram

Originally published in the Minden Times on May 24, 2018. Republished here with permission from the author. 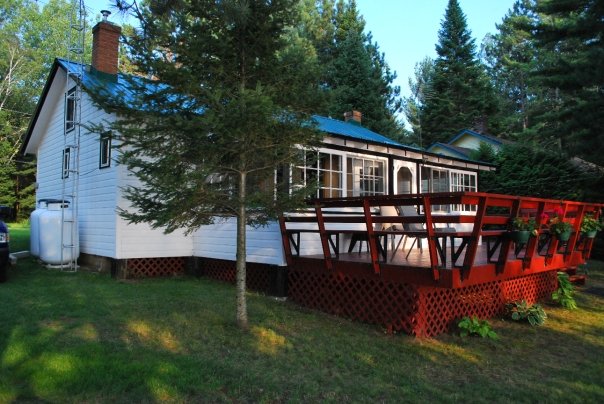 My great-grandfather bought a lot on the eastern shore of Halls Lake in 1932, for five bucks.

He’d been coming to the property for a few years to go fishing. At that time, the car ride to Halls Lake from Unionville, where he owned a grain and feed business, took a couple of days. Scenic Highway 35, decades before the tourism boom of the ’50s and ’60s, was little more than a logging road.

The next year, with help from some friends, my great-grandfather built a cabin on that lot. Eventually christened Sunset Villa, it has mostly gone by and still goes by a more colloquial moniker; it is simply “the cottage.”

This year the cottage turns 85. It has seen more summers than many of us ever will. While there have been some changes – what was the third bedroom was converted to a bathroom when plumbing was installed, the kitchen door was moved when the kitchen was reconfigured – it is still, more or less, the same cabin my great-grandfather and his buddies built eight and half decades ago.

The same wood-lined ceilings, the same stone mantle, the same Georgian windows in the sun porch, where I’m sitting as I write this.

Memories cover every square inch of this property. The lawn that’s hosted a lifetime of croquet, horseshoe and Bocce ball tournaments. The table where countless games of crokinole and euchre have been played, long into the summer night. The corner bar where my grandmother used to discretely mark the level on her rum bottle, so she could tell if my grandfather was stealing a tipple.

Throughout the peaks and valleys of life, the cottage is a constant. It is the inner sanctum of the family. Our sanctuary. It is the nexus where the past, present and future meet.

I am generation No. 4. My one-year-old daughter is generation No. 5. I am watching her explore the cabin’s rooms, learning to navigate its single step where the porch meets the rest of the building, just as I once did.

From the wall, my great-grandfather grins down at us, holding a string of lake trout so crowded that it would certainly land him in a pile of trouble today. On the step outside, where the kitchen door used to be, a step that now leads to nowhere, his name is crudely etched into the concrete, along with those of his friends, all of them long, long gone.

As I watch the sun dip below the coniferous horizon across the lake, in a scene I’ve witnessed a thousand times or more, it dawns on me it might just be the most familiar and most comforting sight I’ve ever known.