The Hollows at Big Hawk Lake 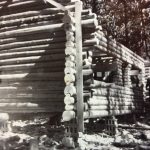 It all started for myself and my parents in August-September 1949 when we trucked in and out of what seemed like every lake in Haliburton County. We had vacationed at Royal View Lodge on Kashagawigamog Lake for several years and my dad didn’t want to return to Toronto in the height of hayfever season so a little cabin in God’s country would be just the answer. They latched onto a realtor in Minden who was selling the crown land lots running up the east side from the old timber dam to almost Scott’s Point. We drove in along the new rough river road to the Government House and looked up the lake (usually in the rain) at the potential lots for sale.
My parents eventually with the aid of a borrowed punt and oars from the Government House boathouse (no longer there) chose the north half of lot #3 (150 feet) to build a little cabin (even smaller than the cottage pictured above) to retreat to the following summer.

The following year (1950) we spent many weekends clearing our way into the lot through the shoreline driftwood and thick bush. Bill Gartshore who was building the first Big Hawk Landing on the water side of the road, built my parents their 10′ x 16′ cabin with a standard outhouse. It was finished the day before we arrived for our first 2 week stay in late August. We had an outdoor kitchen and in-ground refrigeration. We had lots of Coleman products (stove, lamps and heater) and some coal oil lamps. Every year more convenience and toys were added. Our ice (and sometimes milk and veggies) was boat delivered by Dick Hewitt of Little Hawk Lodge. We were almost at the end of the run so the ice block was usually well melted, which didn’t matter to us, as we had a very small ice box. It still exists although it was converted to electric when the hydro came in. 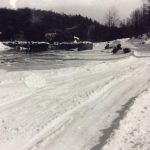 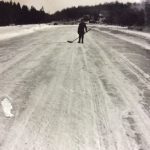 In the winters of the early 50’s we had a four lane highway up the middle of the lake to Crab Lake (Nunikani) for the purpose of trucks and sleds transporting logs destined for what I believe was called, Hodson Mill, located at the end of Mill Rd on Halls Lake. The ‘winter road’ (these days generally called the sand bar) running up the lake from the Government House was to enable the trucks to get on and off the thicker ice with their loads.

The river road was in better shape in the winter than it was in the summer. In the summer they would drag log booms down the lake and then truck them out to the mill. 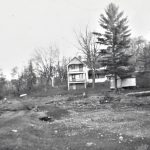 We always loved to capture one of the boom logs as they were perfect for building our log-supported docks (at least until they got water logged and sank). Unfortunately the mill shut down and that put an end to our logging fun.

During the clearing period we stayed frequently at Cherokee Lodge at Buttermilk Falls and my dad was enthralled with the log buildings. In 1952 he contracted Doug Adamson, owner of Cherokee Lodge, to build a log cottage for him. With plans from my dad, hand hewn labour from the McPhails of Maple Lake, logs from the Boshkong area and a little more land (the south half of lot #4), the log cottage was built along with a sister cottage two lots north for Reg and Helen Hickman, who were customers of my dad’s from East York. (See the Bridge collapse story about the tragic death of Helen Hickman and her two grandchildren also on the HHLPOA site.) 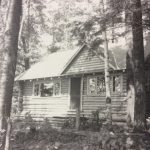 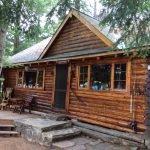 We expanded into the 600 sq. foot cottage in 1953 and its been a labour of love ever since for now the fourth generation of Hollows.

Hydro arrived in 55-56 and that was a milestone in the convenience department. From the time I was 8 until I was 19 I was fortunate to spend my entire summer break at the cottage. When I was 15 and starting to get a little bored as a teenager, I went around to Camp Kawabi (owned at that time by R.H. Perry, head master of Ashbury College of Ottawa) and got a job for the next 5 years. I developed numerous friendships at Kawabi, many of which still exist to this day. In those days the road wasn’t good enough for camp deliveries so all the campers, staff and provisions had to come in by boat. Driving that boat was my job and I loved it!

For forty years my family and I were limited to weekends and vacations. My parents passed in 1976 and 1982 so ‘Sleepy Hollows’ (named by my wife) has been under our helm since then. In the last 15 years my wife and I have come full circle and are back to spending our summers (May to Oct) at the lake and look forward to it every year.

Over the years:
In the early years where the cottage road bridge is now, there was the remains of an old timber dam. Just the side sections still existed. There was none of the log platform or winches left. The gap between the side sections was approximately 15′ and as the water level dropped over the course of the season the current became very turbulent. With our mighty 5 horse power engines it was quite a challenge to make your way up stream. In maybe 1956 – 57 it was decided to remove the remaining side pieces and open the waterway up shore to shore. It was great for 2-3 years when it was decided to build a bridge and road to the narrows. The new waterway is probably a little wider and a little deeper and the motors are a lot more powerful. The currents are still there but not to the same magnitude.

We’ve come a long way from the days of the fifties when we had a few flat bottom punts with 4 and 5 horse power motors with no reverse and in a lot of cases no auto-recoil starters. Then in the late fifties came the mighty 15, 25 or 35 horse power motors and all the skis, discs and surfboards. The boats, motors and toys have kept growing bigger and bigger to this day.

The conveniences of modern day have grown and grown. These days you can’t build a cabin in the bush with no plumbing , no insulation, no heating etc etc. The building code demands a modern day permanent home which is probably progress I suppose. In the beginning we only had battery run or fuel run lights and a radio with flaky reception. Before hydro, one of our neighbours had a generator that would run all day and charge a bank of batteries to run their lights for the night (ahead of their time). No fancy power tools, tv’s, computers, electronic games and sound systems. Oh and of course an endless number of chargers these days.

The cottage will always be our heaven on earth and now is the meeting place for our growing three generations. We just love having the gang together and watching them grow. After all, this is what cottages and cottaging is all about. 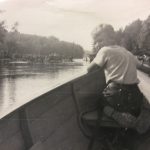 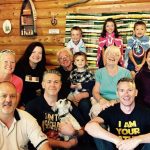