What, My Parents Bought a Cottage?

My parents never intended to own a cottage! Too much work they said. Too much like living in the city they said. (We had rented one at Wasaga Beach.) Why live in the wilderness when we have all of the comforts of home right here in the city? How they changed!

In the summer of 1970 my mother and father were invited to visit the Haw cottage on the west side of Big Hawk Lake not far from the marina. Betty and Howard Haw were the perfect hosts, picking my parents up at the marina by boat, showing the sights, touring the lake, having a few drinks………..all in all enjoying what Big Hawk had to offer.

The Haws very innocently mentioned that Mrs. Walker, who owned the cottage next door, had passed away the previous fall. My parents wandered over to view the property a few times. It had been a small hunt cabin which now had a newly built attached bedroom, an outhouse, a small boat and motor, a dock and, well, that was it!

One week later the sale was finalized and my parents fell into debt to the tune of $7000. Their first tax bill was about $20.

Needless to say, I was shocked by the purchase, but on my first visit, I fell in love with the area as I drove along the river, and had not even seen the lake yet. It was the Thanksgiving weekend of 1970 and it was a glorious one, about 22C, sunny and pleasant overall. In fact, it was so pleasant that I decided to have a swim. In I dove and it hit me, a wall of cold water that took my breath away, not to mention what else it did. That was my first lesson in cottage country, dip your toe in the water first!

My parents led a pioneer type of existence for years at the cottage, the only comforts being cold running water, a wood stove and a window in the outhouse. Despite my urgings, this continued right up until the year 2000.

They very graciously would give us the cottage for two weeks in the summer and all four of our children to this day treasure every moment they spent there. Fishing, hiking, games, training a snapping turtle…….Wait, you say, what was that. It’s a long story but the bare bones of it are; our daughter thought it was an alligator when it touched her toe, my boys fed it bread, and………….it wouldn’t go away. Efforts to relocate it over a two year span, one involving a trip in our car, proved fruitless. Big Blue (yes I dabbed blue paint on his back) just kept coming back and it did get to be quite a joke among our cottage neighbours. We have since learned to be more respectful of wildlife in the area and I like to think that Big Blue’s offspring are alive and  well in Ken’s Bay, as I call it. 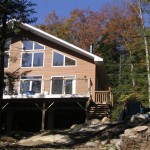 Fast forward to 2002 and we find Sharon and I purchasing the cottage, at a family rate, mind you, just as we were retiring. Then the work began. Tear down most of the old cottage, prepare the lot for building, put in a septic system, build a 1300 sq.ft. cottage to hold all of us and on and on it goes. It was so much work and continues to be so much work. It doesn’t seem like it though, it was and still is more like a labour of love.

Our private road was built in 2003 and it was so nice! Many of our neighbours are close friends and have attended family weddings, visited us in Kitchener, named grandkids after us……well, not really but I tried.

We are now a family of eighteen, with eight grandkids. Our children, Matt, Greg, Marc and Beckie are in their thirties and forties. And, as of this past March, all four are now the proud owners of the Warden cottage.  Sharon and I are still the caretakers, the bill payers and the decision makers but it has passed on to the next generation. How long that arrangement will last, who knows, but we are giving it a good try.

Big Hawk Lake has become a safe haven for us all. It is worth fighting the traffic to get there, it is worth the family meetings we have had to sort out issues, it is worth the work and the expense and the stress and we love it!

So ends a very brief summary of our piece of heaven. Say hello to Sharon and me when you see us kayaking on the lake, one blue kayak carrying a white haired guy and one orange kayak with the second love of my life in it. The cottage being the first of course!