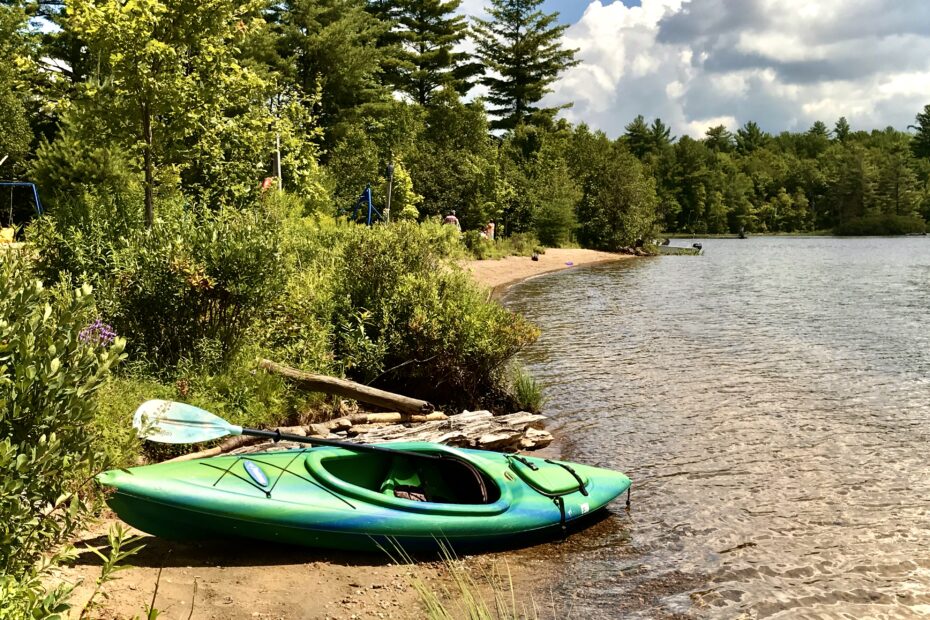 How often have you enjoyed this little jewel at the eastern side of Halls Lake, beside the Kennisis River? Perhaps you have taken your children there to enjoy the wonderful playground and the sandy beach or to swim and dive from the rafts; perhaps you have enjoyed barbecues, or socialized with other cottagers for a community event; maybe you have taken advantage of the swim lessons and aqua-fit classes. You may make it a destination for your morning or evening walks, with the reward of contemplating the mist or the ever-changing palette of the sky as the sun sets over Halls Lake.  Have you ever stopped to wonder how it came to be, and for whom it was named?

Considering that 95% of the shoreline of Halls Lake is privately owned,[i] we owe a debt of gratitude to the township and in particular to one man, Elvin Johnson, for developing this remnant of crown land into a safe swimming area and playground for the public.

The history of the area stretches far back to pre-European times, when the Mississauga and Ojibway people would make seasonal visits to hunt and fish. [ii] One can well imagine this location as being ideal for setting up a camp. Following surveys in 1857, parcels of land were offered for sale in 1860. On the northeast side of Halls Lake, Robert James Deacon began acquiring land, and further up the river, Edwin Johnson was granted the flats to the west of the Kennisis River in 1890 [iii]. Edwin Johnson and his wife Eliza were the parents of Walter, and the grandparents of Elvin Johnson. [iv] Although farming proved difficult, logging became the prime industry of the area. C.W. Hodgson obtained logging rights to the area, having bought from the bankrupt Gull River Logging Company. The land he purchased for his sawmill, the Halls Lake Lumber Company (later the Hodgson & Jones Lumber Company) was from the Deacon/ Ackerman homestead which was on the north side of the present causeway. [v]

The area where the park is located remained as crown land according to the map on Land Tenure from the Lake Management Plan of 2006 [vi] In the mid 1980’s, the land was offered by the MNR to the township. According to Elvin Johnson, “I was on council at the time, and the area was offered by the MNR to develop but no one seemed interested. I was always interested in parks and council gave it to me to develop.” [vii]

Elvin Johnson was a man dedicated to bettering his community. Born in 1914 to Walter Johnson and Mary Jane Faulkner, in a log house just north of the Hawk Lake Road, off what is now Highway 35, he lost his mother when he was four, and was subsequently raised by Alfred and Sarah (Davies) Mason, as his own father had five other children and was unable to care for his smallest son.

Elvin and Wilfred Mason grew up as virtual brothers on the Mason farm on Boshkung Lake. The two of them bought adjacent land from Caleb Davis, and as the first of the two to marry (Ruby Keyho, in 1944), Elvin, bought out Wilfred.

Apparently, Caleb had lived in a root cellar the first year, and the barn the second, before completing his house. When Elvin and Ruby moved in, they put an addition on the original house.

At home as well as growing much of their own produce, the family (which grew to include three sons, David, Ray and Ralph) kept cows, ducks, chickens and pigs for their own use, and had a team of work horses.

Elvin cobbled together many jobs over his lifetime, cutting and splitting wood, haying, logging, working as a carpenter (having built Calumet Camp), shoveling roofs, and selling Hobart equipment to camps, restaurants and lodges. In the 1930’s he worked for the survey crew for the new highway between Twelve Mile Lake and Dorset, cooking at their camp at Wren Lake. The following year he was part of the back-breaking work of drilling and blasting for the road.  He even ran a children’s camp for awhile on Wolf Lake, north of Dorset, called Camp Timberwolf.  His son Ralph recalls occasionally flying to the camp with local pilot and owner of Cherokee Resort, Doug Adamson, and also visiting the camp.  For local teenagers and tourists, the most memorable business was his riding stable from which one could ride for an hour on the nearby trails.

Hardworking, caring and involved in his church, Elvin had a deep sense of community responsibility. Optimism for the potential of his community and for the young people in it probably drove him to volunteer in many capacities such as leading the local Boy Scouts.

In the early 1970’s he became convinced that the township needed a fire department, and with the support of councillor Dick Kinsman, he was able to not only acquire a pumper but recruit about twenty men to volunteer. Today’s active volunteer firefighter team and Fire Hall as well as the community centre are a direct result of his lobbying.

Elvin served several terms as a councillor over sixteen years, and was Deputy Reeve from 1985 to 1988. He worked on many committees over the years, such as the dump committee, parks and recreation, schools, roads, community centre and rebuilding the log chute. This brings us back to the serendipitous fact that he was on council at the very time that the MNR offered the land to the local township. His ability to imagine a park, and then bring it to fruition is a testament to his vision and determination.

Together with a local contractor, Bob Baker, who donated a lot of time bringing sand to the location, and summer students, he saw his dream completed by 1988. That year, he was no longer on council.  He received the Citizen of the Year award and was asked if he would like the park to be named after him. It was a fitting commemoration.

Elvin died in 1999, and his wife Ruby in 2009. In his later years he continued to stretch his horizons, including making trips to Ecuador to help his nephew with community work there. He took up painting at the age of eighty, and developed a talent for which perhaps he had little time in his earlier life. Many of his works hang on the walls of his son’s house, in the exact location where he had settled many years earlier.

Over the years the park was enjoyed by many, and in recent years several important improvements were made. In 2014, the Township of Algonquin Highlands replaced existing playground equipment, relocating it to a more central area of the park. To cover some of the expenses, an agreement was made with the “Giver” TV Ontario Kids Program to film the rebuild, showing kids being involved in assisting with the work. [viii]

Recognition of the importance of shoreline naturalization has been one of the principal concerns of the Halls Hawk Lake Property Owners Association.  In 2015, the association was recognized by the Haliburton Highlands Land Trust at their annual Wild About Nature Gala at the Stanhope Firefighters’ Hall as ‘Enviro-Heroes’ for the work done on the Elvin Johnson shoreline restoration project. Accepting on behalf of the association, president Peter Dadzis acknowledged and gave a great deal of credit to Terry Moore for his knowledge and contributions to not only this project but all environmental issues.[ix]

In 2017, the lake association developed a plan and received funding from Watersheds Canada as part of their ‘Natural Edge’ initiative to complete shoreline preservation planting at the park. This along with council’s contribution of staff time and equipment allowed the planting to occur in 2018 of many native shrubs such as bearberry, bush honeysuckle, grey dogwood, highbush cranberry, meadowsweet and red osier dogwood. The idea is to prevent erosion, reduce nutrients leaching into the lake and help to deter Canada Geese from congregating on the grass. [x]

It continues to be a “water’s edge delight of nature” as described by Brenda Peddigrew.[xi] As our understanding of lake ecology deepens, and our awareness of the benefits of nature increases, then we can only hope that this little area of Halls Lake continues to be nurtured and carefully maintained for the benefit of the lake, the people and the flora and fauna.

Again, to quote Brenda Peddigrew: “Thank you Elvin Johnson. Your park continues to be a well-cared-for corner of Algonquin Highlands. It’s worth looking for, especially on those summer days when sitting next to the water is necessary, or when the mists of autumn stop your breath with beauty.” [xii]

[vii] Quote from Elvin Johnson. Moffatt, Carol. Getting Involved Help Forge a Sense of Community.  Supplement to the Times, July 22, 1991.

Moffatt, Carol. Getting Involved Help Forge a Sense of Community.  Supplement to the Times, July 22, 1991.