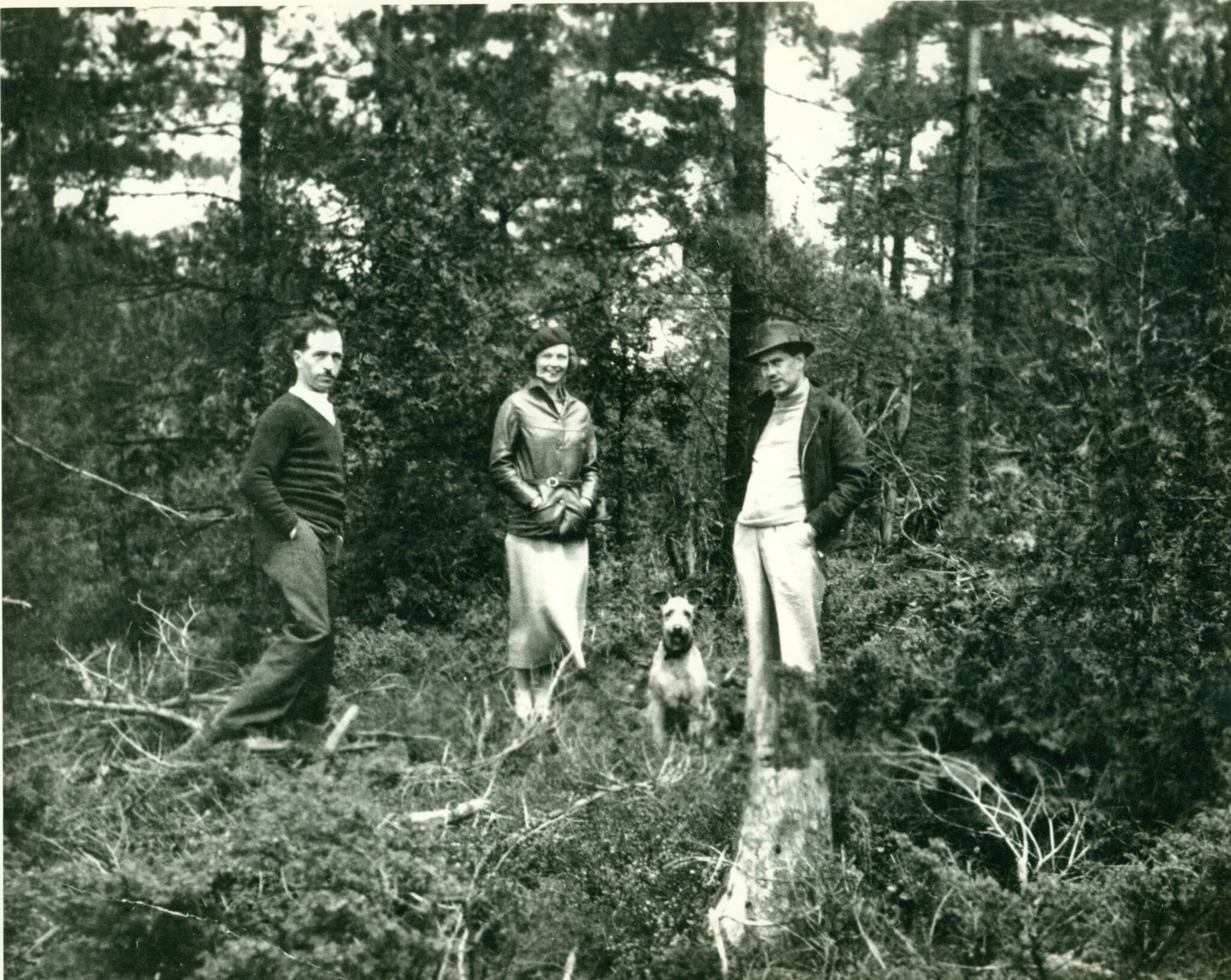 Photo: Ross Lugsdin, Audrey Moore, William Campbell Moore and the old dog Pat, just before the land was cleared in 1938

My parents purchased our one acre island in Little Hawk Lake in 1937 from the Department of Lands and Forests.  My mother had been interested in this island for some years as she and my father grew up in the Madoc area and had a yearning to be back to a place where they could relive their love of the outdoors.  They came to know first of all Big Hawk Lake, as a camping destination.  Then later they spent time on Little Hawk, with the family of a colleague, Ross Lugsdin.  Ross and my father both worked for the federal government. Along with the Lugsdin family, we had spent a few summer holidays earlier in the 1930’s at Gleneda Inn[i], owned by Walter Johnson and his second wife, Queenie Johnson, or Aunt Queen as she was known.  During these stays at GlenedaInn (now Little Hawk Resort), my mother, Audrey Moore had let Queenie Johnson know that she was interested in the island.  When the Ontario government began to offer properties on Little Hawk Lake for private ownership under a 99 year lease program

First a small cabin was built in Toronto and transported to Little Hawk which we stayed in while the cottage was being built.  A local contractor by the name of Sam Armstrong constructed the cottage in 1937.  Material was purchased from Windsor’s lumber mill on Mirror Lake in Carnarvon, Ontario.

We always looked forward to spending our summers at Little Hawk Lake and my sister Rosemary and I couldn’t wait until school finally ended in June and we were back at the cottage.  The trip from our home in Lorne Park (now Mississauga, Ontario) was quite an ordeal, as my sister and I both suffered from severe motion sickness.  The road from Highway 35 to Little Hawk Lake was a one lane dirt road that was always overgrown and many times when travelling this road, someone would have to get out of the car and hold up a large tree branch that was learning out over the road, making it impossible to travel.  If you met another car along the road, it was impossible to pass and one or the other driver would have to back up and hope to find a place to pull off.  The road to Little Hawk Lake ended just past Gleneda Inn.  This was the only resort on the lake at this time.  There were approximately 15 cottages on Little Hawk Lake back then and no cottages north of our place on Moore’s Island until the late 1940’s.  Once Oakview Lodge was built, we always dealt with the Sawyers, not the Hewitts of Little Hawk Resort, and I remember at Oakview that the main meal of the day was served at noon.  When Rosemary was a teenager she stayed with the Sawyers and worked at Oakview .

During our summers at Little Hawk Lake, my mother and my grandmother became acquainted with a Miss Charlotte Cooper, who grew up on Blagdon Hill.  Miss Cooper recalled that long before there was development on Little Hawk Lake, she could see our island from the upstairs bedroom window of the two storey stone house that John Henry Billings, her uncle, had constructed on Blagdon Hill beginning in 1868.  When I was a kid we would walk through the woods to Blagdon Hill and sometimes eat our picnic lunch there.  Charlotte Cooper told us that in the spring when the weather became mild, a white tent would appear on the island and an elderly woman spent her summers there.  It is assumed that this woman was indigenous.

My mother traded for a porcupine quill and birch bark basket from a First Nations family who came by in a birch bark canoe back in those very early days.  Thankfully this treasure remains in my sister, Rosemary (nee Moore) Bombier’s possession.  We also know that Walter Johnson owner of Gleneda Inn was a personal friend of Chief Joe Kennisis (pronounced Kennes by the locals).

In the 1940’s there were booms of logs that went down the lake.  There was a logging camp at the top end of the lake at the portage that goes into Cat Lake.  As a kid, I remember that there was a mill on Kennisis Lake but no road and no cottages.  My sister Rosemary recalls the loggers “dancing’ across the log booms.  The work horses at the logging camp of Mossom Boyd are also distinct memories.  As kids we also remember the simple things.  Rosemary would turn over stones looking for crayfish.  The sound of whippoorwills on the May 24th weekend is also a clear memory.  Back in the early years there were also chimney swifts that always nested in the chimney and you could hear them twittering away.  The fact that dad had to shoot some of the problem porcupines remains a vivid recollection too.  There was no electricity on the lake and we spent our evenings around an Aladdin lamp playing games and reading.  Twice a week, Peter Sawyer would come around the lake in a big punt delivering blocks of ice to the cottagers’ ice boxes.  Our ice box was special and even had ornate handles.

It was a completely different time then.  If you saw one boat in a day it was really something.  You could go skinny dipping and not worry about other people around.  The fishing in the lake was phenomenal.   There was always fresh-caught trout and blueberries seemed to grow everywhere.  There was always a fish in the sink just waiting to be prepared for the next meal.  In addition to lots of fish, there were also lots of turtles and birds back then.  We used to get our minnows from Sam Davies who kept them in a milk can.  He had a boathouse at Little Hawk Landing and also a log house by Little Hawk Road Bridge on the Kennisis River.  We even had pet snapping turtles that we fed minnows to.

The outboard we had in the early 1940’s was an Elto “Pal” 1.1 hsp. on a homemade plywood boat that seemed to take all day to get anywhere on the lake.  We would go on many picnics over to Big Hawk Lake where there were only two places, “Scott’s Point”, where the game warden Wally Scott stayed and “The Government House”[ii] where different government people stayed, such as the people who controlled the water levels and surveyors.  Scott’s Point is still owned by the Scott Family who are from Kinmount, Ontario.  Bill Scott, Wally’s son was the Conservative Federal MP in the area for many years and his daughter Laurie is in Provincial politics and still comes to the family cottage on Big Hawk.

The 99 year leases attracted a lot of people.  There were many American families, professionals like civil servants and principals.  There were also a lot of doctors.  When you bought the property you had 18 months to build a structure and it had to be worth at least $500.00.  It was some time in the 1950’s that the 99 year lease changed to Letters Patent, except in Algonquin Park where cottage owners are now fighting to hang on to their properties.[iii]

Cottagers began to arrive on Big hawk Lake in the late 1940’s and early 1950’s.  As a road to Big Hawk had not yet been constructed, access was by boat from the landing at Little Hawk.

For me the story changes in 1971. I grew up in Lorne Park, Ontario which was a rural farming community.  When it was decided to amalgamate the small communities like Lorne Park into the City of Mississauga, I decided it was time to get out and move to Haliburton.  I applied to different jobs and ended up as building inspector for the township of Stanhope, which later became Algonquin Highlands.  I retired in 2005.  In 34 years I have seen a lot of changes in this area.

I’m glad that my sister and niece still go to Moore’s Island every summer.  It is a special place!

Story written by Jim Moore and Joan Hamilton, with thanks to Rosemary Moore Bombier and Laura Bombier.

[i] See story So what happened to the parking at Little Hawk?